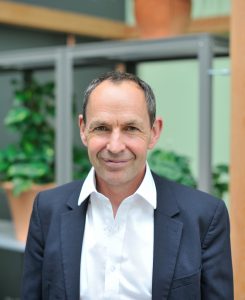 Mike Berners-Lee consults, thinks, writes and researches on sustainability and responses to 21st century challenges. This is his third book.

About his first book, How Bad Are Bananas? The Carbon Footprint Of Everything, Bill Bryson wrote “I can’t think of the last time I read a book that was more fascinating, and useful and enjoyable all at the same time”

His second book, The Burning Question, co-written with Duncan Clark, explores the big picture on climate change and the underlying global dynamics, asking what mix of politics, economics, psychology and technology are really required to deal with the problem. Al Gore described it as “Fascinating, important and highly recommended” and was among MPs’ top ten summer reads.

Mike is the founder of Small World Consulting, an associate company of Lancaster University, which works with organisations from tech giants to supermarkets. Small World is a leader in the field of carbon metrics and their use.

He is a professor at Lancaster University’s Lancaster Environment Centre, where his research includes sustainable food systems and carbon metrics. He co-ordinates the Global Futures event series which are freely open to all and explore big global challenges in multidisciplinary ways.